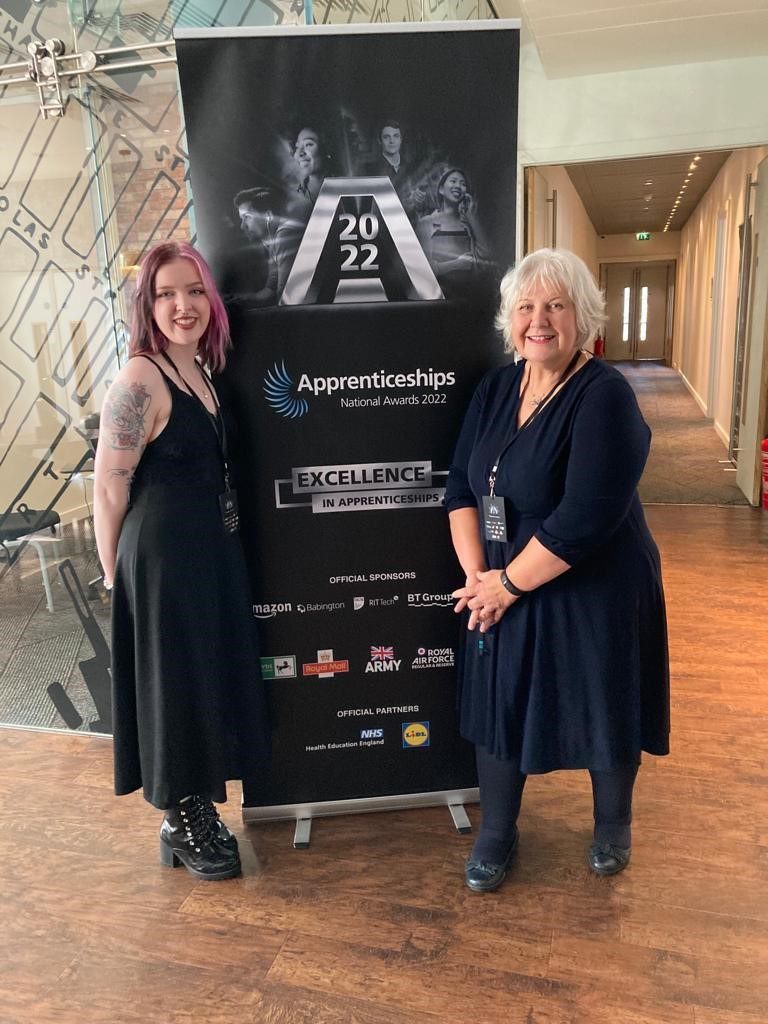 National Apprenticeship Award is swooped by a Lancashire Library Assistant

Nelson and Colne College Group apprentice, Holly Emmett is recognised as a ‘Rising Star’ at the National Apprenticeship Awards

Holly Emmett, who is heading into the final stages of their 16-month apprenticeship with Lancashire County Council’s library service, is celebrating being awarded as the Nation’s ‘Rising Star’ at the annual National Apprenticeship Awards.

Prior to applying for their Library Archive Service Assistant Level 3 Apprenticeship, Holly was a graduate of Film Studies at the University of Salford and had found themself a job as a writer – yet she was soon seeking a change of career.

The LIAS L3 apprenticeship appealed to the bibliophile in Holly, an avid fan of literature whose passion for the written word can be seen through their online project: SpoopyHol: a community Holly has built through Instagram and YouTube in order to provide a safe space for likeminded people to share in their enthusiasm for literature.

During their time working at Burnley Library, Holly has been fully immersed in community-based work, culminating in an LGBT+ project, Stand Out, that she helped initiate and obtain National Heritage funding for.

“We were able to obtain National Heritage funding to be able to welcome young queer people and allies to learn about the queer history of Burnley and produce artwork inspired by what they’d learned”, Holly remarked.

When asked about the award win, which Holly was nominated for by their colleagues at Burnley library, Holly was ecstatic, stating; “I was honoured to have even been nominated by my team!

“A lot of library work becomes second nature and I think it’s easy to lose touch with how much the simplest of assistance can mean so much to individuals within the local community”.

Lancashire County Council have also voiced their congratulations and pride in Holly for their incredible achievement, writing on their official Twitter account “We are so proud of Holly for this fantastic achievement – let the celebrations begin!”

Furthermore, Holly’s assessor at Nelson and Colne College Group’s Apprenticeships and Training team said; “Holly has been an exceptional apprentice, who has brought new ideas to her workplace and is keen to welcome young people from diverse backgrounds to use the library facilities”.

As well as being an award-winning apprentice, Holly has built a broad and vast online community through various social channels which she enjoys engaging with in their spare time. She is also an avid fan of metal music, recently acquiring tickets to the next Iron Maiden tour which she is particularly excited about.

When asked about their future within Lancashire Libraries, Holly optimistically and enthusiastically states their intention to stay within the library service, hoping to work their way up to roles with more responsibility and hence more interaction with the community in which she loves.

When asked if she had any advice for current or prospective students, apprentices or otherwise, who may have been inspired by their success, Holly had the following to say:

“I was very lucky to have been part of an amazing and supportive team at Burnley library. My colleagues trained me well, and they supported me and encouraged my ideas at every turn. The apprenticeship is what you make it, so I think my advice would be for people to extend both hands and grab onto any opportunities that come their way. By talking to experienced people around you, you’ll be able to find what ignites your personal passions the most and then the world is absolutely your oyster.”

To learn more about the apprenticeships on offer through Nelson and Colne College Group or Lancashire County Council, please follow the links below.