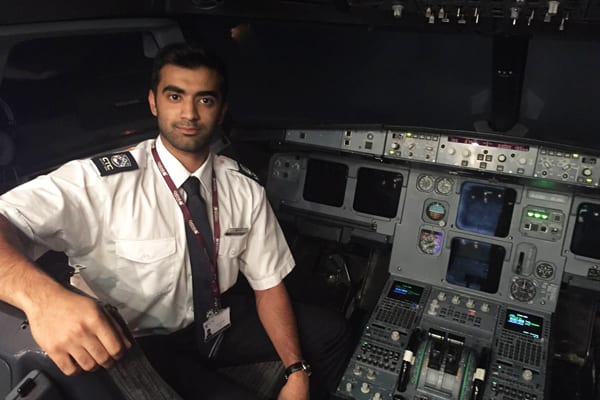 An aspiring pilot and former Nelson and Colne College student is flying high after completing six months of intensive training in New Zealand.

For Hassan Imtiaz, it has been a childhood dream to become an airline Captain, so when he secured a place on a competitive Cadet scheme with Qatar Airways one year ago, he couldn’t believe his luck.

The 21-year-old now has just six months of his training left to go before he becomes a fully qualified Second Officer, and has shared his experiences of the last half year soaring the skies more than 11,680 miles from the UK.

The former Marsden Heights Community College student, from Nelson, who studied Business, Economics and Maths at NCC, said: “The last six months have been amazing, and I feel very lucky to have had this opportunity.

“It has been the highlight of my training so far – it is one of the best countries in the world, and to fly there is something else. There are amazing views, and the scenery is spectacular. I have six months of training left, so it is all about keeping focused now.”

Hassan got his initial flying licence while studying at NCC, and after finishing from College he earned a place as a Cadet with Qatar Airways. In the first six months, he gained the theoretical strand of his Airline Transport Pilot Licence – where he had to undergo 14 exams at ground school in Southampton – and in New Zealand he has managed to complete competency assurance tests, learning to fly airlines in good bad weather. In the next six to 12 months, he will undergo his final training, and do line training – 12 take-off and landings on the Airbus A320 – in Doha, Qatar, to fully qualify.

Hassan added: “The workload I had in my A Levels helped me to prepare for ground school. The teachers at NCC were very supportive and gave me the help I needed in class, and at additional workshops.”

Hassan is also keen to stress to current College students that even if you make the wrong choices for your future initially, NCC can help get you on the right track for your future. Although he always knew he wanted to be a pilot, Hassan found himself studying the wrong subjects at a local sixth form, and decided he needed to start again if he was going to achieve his aspirations. He has never looked back, and is now excited about continuing on his exciting, demanding and ambitious career journey.

Hassan’s Economics tutor Emma Richardson said: “We are always delighted to hear from our former students, and I am thrilled that Hassan took the time out of his busy schedule to come back and share his fabulous news with us. His ambitions to become a pilot were evident throughout his time at NCC, and to hear that they are now becoming a reality is so exciting. We wish him the best of luck, and hope his story will inspire prospective and current students of Nelson and Colne College.”

For more information about studying at Nelson and Colne College contact 01282 440272 or visit www.nelson.ac.uk