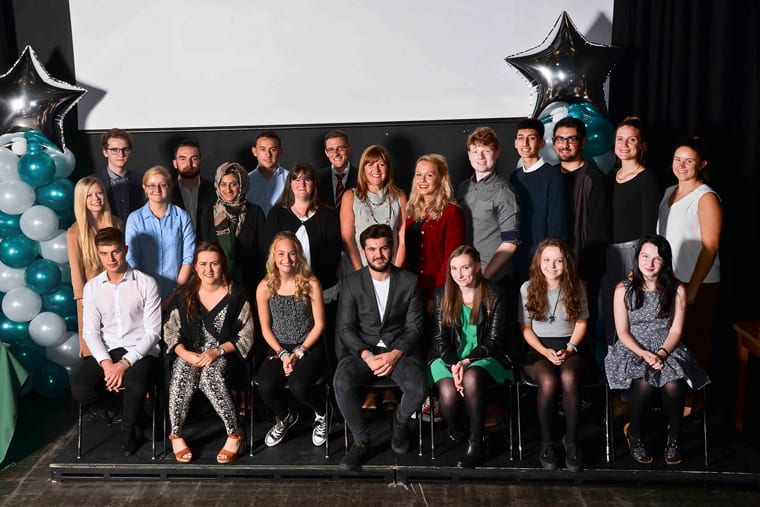 Congratulations to Nelson and Colne College’s A Level stars of 2015!

A Level stars of 2015 have been recognised for their dedication and commitment over the past two years at a special ceremony at Nelson and Colne College.

Around 30 students were invited to the glittering event, which included a Buck’s Fizz reception and canapés and a presentation of awards to celebrate outstanding student achievement.

Alumna and actress Amy Strange, who has recently appeared on BBC’s The C Word alongside Sheridan Smith, acted as guest speaker and gave an energetic and unique performance that encouraged each student to dream big as they embark on their next journey outside of the College gates. Other VIP guests included Pendle MP Andrew Stephenson, trustee of The Fort Prize Mr Robert Fort and College governors Nadeem Rashid and David Whatley.

A Student of the Year was chosen for each subject area, and special awards were also given to four exemplary students. The Barbara Ann English Literature Award was won by Ruby Haworth, the Barker Leaver Prize for the most diligent student by Oliver Smith, The Leaver Trust Fund for outstanding practice in the Textiles sector by Ciara Brown and The Fort Prize for the highest achieving A Level student to Charles Choyce – who gained four A* grades and who is off to the University of Warwick to read Mathematics.

Charles, 18, a former Colne Park High School student, said: “It has been really nice to see that the grades I managed to achieve have been recognised. The support at the College has been incredible, so to be helped financially as well with The Fort Prize is an extra bonus.”

And Principal Amanda Melton added: “Our student awards ceremonies are one of the highlights in our annual events calendar as they provide an opportunity to recognise and celebrate the achievements of our most dedicated students.

“This year we are delighted to be celebrating a 100% pass rate for the fourth consecutive year, as well as a rise in top grades. We have seen some outstanding successes from our students and we wish them the best of luck on their next journey. We are proud of each and every one of them and hope they stay in touch as part of our extensive alumni network!”

A quarter of students at Nelson and Colne College have achieved coveted A* to A grades, while many are

going on to study at top universities across the UK, including the University of York, Imperial College London and Newcastle University. Other students are planning on taking gap years, including Sam Gugi who is going to Goa, India, to gain work experience in a private hospital, while some are set to begin apprenticeships.

This year’s Student of the Year award winners are: