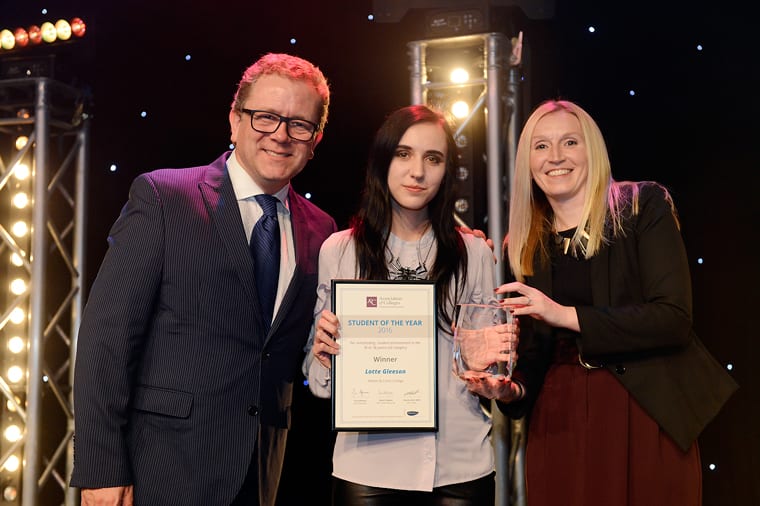 An exceptional student has thanked Nelson and Colne College staff for their “determined support” after taking home the gong for a prestigious national award.

Lotte Gleeson, 19, was left over the moon after beating tough competition across the country to be named winner of the coveted 16-18 category of the Association of College’s Student of the Year Awards.

The former Colne Park High School student, who gained A*A*A*A in her Maths, Further Maths, Chemistry and Physics A Levels, impressed judges with her spirit and motivation, having overcome a personal battle with mental health.

Lotte, who is now reading Physics at the University of Oxford, said: “I felt really shocked when I found out I was the winner of the 16-18 category, but now that it has sunk in I feel very proud of myself and how far I’ve come.

“The awards ceremony was a really special night and gave me the chance to meet some amazing people.  I also want to thank everyone who has believed in me, both in and out of college. It is their determined support that has given me the confidence to achieve what I have.”

The award tops off a stellar year for Lotte, who not only gained her dream place at the University of Oxford, but also won the Achievement in Academia Award at the Burnley and Pendle Youth Achievement Awards and was named as an AoC “Future Star” after NCC alumnus and scientist John Spencer picked up an esteemed Gold Award – an accolade celebrating the success of further education alumni. Following her most recent achievement, Lotte will enjoy a Winners’ Reception at the House of Commons in December.

To get to University, Lotte taught herself most of the A2 Physics syllabus in her first College year, with 1:1 support from NCC staff. As well as thriving academically, Lotte also made the most of additional enrichment opportunities available to her, and secured her own volunteering work, to stand her in good stead for her future. She now hopes to secure a job in Physics research and development.

NCC Principal Amanda Melton said: “We could not be more proud of Lotte’s achievements. Throughout her time at NCC, we have seen her develop, not only academically, but in confidence as well, and we are absolutely delighted that her success this year has been topped off with such a prestigious national award. Lotte is a shining example of how to get the very best from your time at College, combining her studies with enrichment and volunteer work. We wish her the very best of luck on her next journey, and are confident she will continue to thrive at Oxford.”

Ian Ashman, President of the Association of Colleges, added: “Lotte Gleeson is an inspiring young person who has achieved great success.  She thoroughly deserves to be named the Student of the Year for 16 to 18-year-olds and I congratulate her on her success.”

This year, Nelson and Colne College celebrated a 99.9% A Level pass rate, with more than half of exam entries achieving an outstanding A* to B grade. As well as Lotte heading to Oxford, the College also saw students progressing to other top Universities across the country, including the University of Cambridge, the University of Manchester, and Newcastle University.

For more information about studying at Nelson and Colne College visit www.nelson.ac.uk or contact 01282 440272.