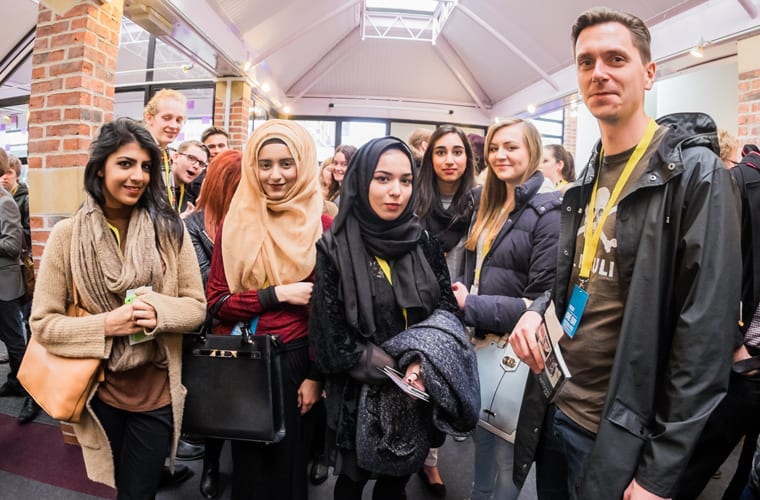 Students got a taste of life ‘behind the scenes’ when they attended the Aesthetica Short Film Festival, in York.

The 17-strong group, from Nelson and Colne College’s AS and A2 Film and Media courses, joined the celebration of independent short film from around the world earlier this month.

As well as viewing a diverse selection of films, students also attended an informative masterclass with Warp Films’ Head of Production Barry Ryan – whose portfolio includes films and television programmes, such as Dead Man’s Shoes, This is England, Four Lions, Submarine and The Last Panthers.

ASFF 2015 transformed York into a dynamic multi-venue cinema – encouraging students to view films from a range of genres in distinct locations, including a small café to the more ostentatious surroundings of the York Theatre Royal.

As well as being an enrichment opportunity for students, the trip was also directly linked to their practical production – as they were able to see a mixture of low and high budget short films. The masterclass also contributed to NCC’s commitment to helping students prepare for their future, with Ryan giving a fantastic insight into the film industry.

NCC’s Graphic Design and Media Studies tutor Rick Williams said: “For three years I have been running this trip and this is the best one yet.

“The students showed maturity and were impeccably behaved, responding positively to the day. They managed to gain inspiration for their upcoming coursework by viewing a range of films from differing genres.

“Moreover the trip gave the students an opportunity to taste York city life and see the university campus, getting them enthused about their journey into higher education.”

The Government estimates that the UK’s creative industries are now worth £71.4 billion per year to the British Economy, and NCC can help students achieve their dream career within this sector. For more information about Film Studies and Media Studies at NCC visit www.nelson.ac.uk or contact 01282 440272.