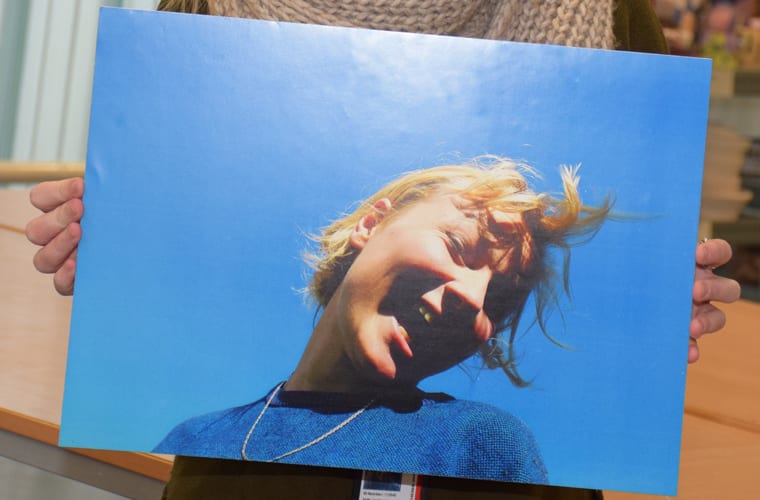 A talented Art student is all smiles after her photograph was selected from more than 1,000 entries to feature in The Strand Gallery, London.

Morgan Ottewell, 17, who studies Level 3 Art and Design at Nelson and Colne College, was left over the moon after being announced as a runner-up in the British Humanist Association competition.

Since the theme of the contest was “Happiness”, Morgan decided to capture a memorable moment when she was with one of her closest friends Celia. Her head and shoulders shot is currently being exhibited at The Strand, in John Adam Street, until Monday, and has been selected as the promotional image for the whole exhibition on the gallery’s website.

The former Colne Primet Academy student, whose ambition is to go to University and become a fashion designer, said: “I was really shocked when I found out I had been successful – I didn’t expect it at all.

“Nelson and Colne College are helping me to prepare for University, by allowing me to develop my skills and giving me other opportunities. Being named a runner up in this competition while I am so young has made me think that I can do anything I set my mind to in the future.”

Judges said that the photographs submitted by the winners and runners-up felt intimate and very personal – and added that they could feel the individual behind the images. They also said that the chosen photos showed a deep understanding by the photographer of what they were portraying.

The competition was held to commemorate the 50th anniversary of the BHA’s Happy Human logo, and attracted 1,100 entries.

Head of Division for Creative and Digital Morag Davis said: “We are very proud that at just 17 years old Morgan’s talents have been recognised and her work has been exhibited at The Strand, in London.

“NCC Art, Design and Media programmes offer exceptional opportunities for work experience and enrichment – to help give students a head start in their careers and University applications.”

One in 11 of all UK jobs is now a creative job, and one in six of all UK graduate jobs is a creative role. At Nelson and Colne College, there is an extensive studio and workshop space, and tutors always encourage students to produce real client briefs and develop their portfolio to help them achieve their dream role.

For more information about Creative and Digital at Nelson and Colne College contact 01282 440272 or visit www.nelson.ac.uk