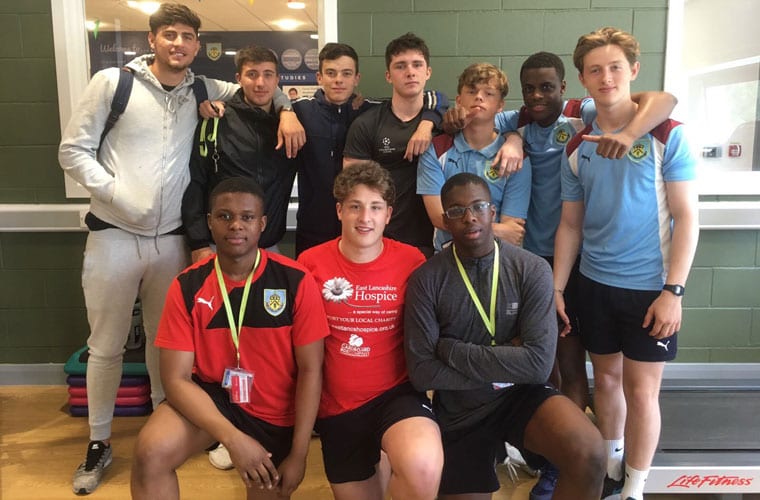 Ten dedicated Nelson and Colne College Sport students averaged over a kilometre a minute when they completed a gruelling 230km duathlon charity challenge.

Raising money for East Lancashire Hospice, the students deployed a roll on, roll off system when they used treadmills, bikes and cross trainers in the College gym to complete the challenge in just over three hours.

The group calculated the length of the challenge by each member working out the door to door distance from home to College. With two of the members of the team travelling from Merseyside and one from Cheshire to Nelson on a daily basis for the unique Burnley FC Shadow Squad programme, it boosted the distance to 230km.

Nosa Agheyisi, 18, from Widnes, said: “I enjoyed the challenge and it was a great effort by the team to get the job done. When it was not your turn on the equipment, we were all encouraging each other, which was really good.

“I’m surprised we managed to do it in such a quick time but it is a brilliant feeling.”

Another member of the Burnley FC Shadow Squad, Prince Zabila, 18, from Liverpool said: “It was a great experience. It is really good and such a nice feeling that that the money raised through our hard work in this challenge is going to help somebody else.”

Success stories include Mo Sangare who is now a professional footballer with Newcastle United Football Club and Joseph Kouadio who secured a place on the prestigious Nike Academy.

An extension of the partnership will officially kick-off in September with the launch of a Girls’ Academy to mirror that of the boys’ Shadow Youth Team. It will be available to students studying any College course, subject to a successful trial, and will be a fantastic opportunity for budding female football stars to combine playing skills with academic practice in the dynamic surroundings of Turf Moor.

Head of Division for Sport, Charlie Moss, said: “I’m incredibly proud of the students’ efforts and they worked really well as a team to finish in such a fast time.

“We are all really pleased the students have chosen such a worthy cause to raise money for. Many of the BFC Shadow Youth Team travel such a distance to engage in the programme and have shown real commitment to their studies this year.”

Nelson and Colne College has a Career College ethos and offers a variety of additional routes in to Sport for those looking at a future in the field. This includes A Level Physical Education, Vocational courses in Sport at Levels 1, 2 and 3 and a Leisure and Sport Apprenticeship.