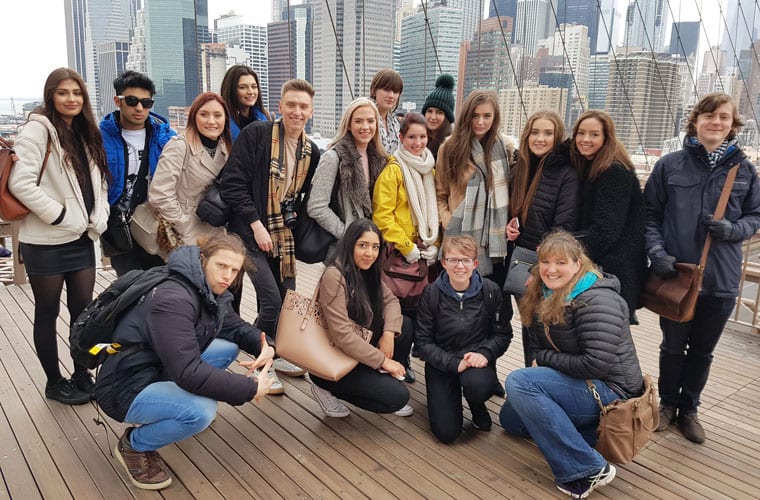 NCC students enjoy a slice of the Big Apple experience

Twenty students and two members of staff from Nelson and Colne College got a taste of the Big Apple during a five day trip to the world famous city.

An action packed agenda was lined up for the A Level students to give them the fullest flavour of life in New York and the group kicked things off with an evening in Times Square soaking up the unique atmosphere and enjoying the hustle and bustle of Grand Central Station.

Students went to Liberty Island where they posed for photos with the Statue of Liberty and witnessed US Air Force jets performing a flyover with red, white and blue smoke, while a trip to Ellis Island allowed them to explore the fascinating historical context of immigration in the USA and New York.

Students also enjoyed exploring Central Park, they took in an awesome stunt-filled evening show by Cirque Du Soleil in Broadway, and they visited the Tenement Museum where they learned about the discrimination Irish immigrants faced in gaining employment as well as the stereotyping of racial groups.

The trip was rounded off with whistle stop trips to city highlights the Empire State Building, Brooklyn Bridge and Wall Street and the group squeezed in a spot of shopping for goodies and souvenirs too at renowned stores such as Saks Fifth Avenue and Bloomingdales.

Becca Westwell, 18, from Barrowford, said: “I really enjoyed the trip to New York as I got to see all the sights and make some great friends. Opportunities such as this trip are a great reason to attend NCC.”

Ashleigh Hoban, 18, from Nelson, said: “The best part was the Broadway show! It wasn’t something most of us had heard of but it was by far one of the best productions I’ve ever seen.

“I would recommend Nelson and Colne College to others because it has helped me progress my skills. I’ve also made many friends and got to know new people through College.”

Offering enrichment opportunities alongside College studies is a key part of NCC’s Career College ethos as it aims to get students ready for further education, an Apprenticeship or the world of work.

The College is number one in Lancashire for student satisfaction, according to a recent FE Choices Learner Satisfaction Survey, and the latest government data places NCC as top in the county for A Levels, based on progress scores, measured against colleges who entered more than 100 students into exams.

Social Sciences teacher Ruth Shaw said: “New York is one of the world’s most iconic cities and we had a wonderful time doing as much as we could from dawn until dusk to make the trip extremely enriching and worthwhile for our students.

“It was a fantastic five days and educationally, students really relished gaining a greater knowledge on important topics such as immigration.

“The visit also broadened their horizons, allowed them to experience a different culture and provided a platform for them to develop their independence and confidence – all great preparation for their futures.”