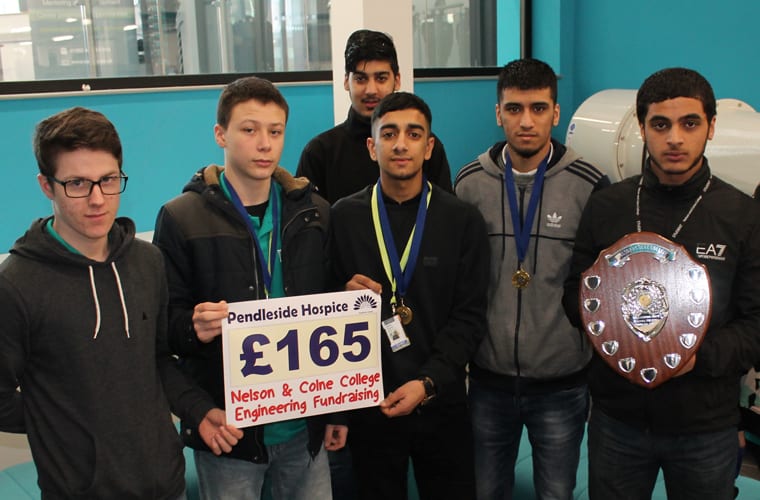 Staff and students at Nelson and Colne College have raised £238 in aid of Pendleside Hospice. The money was raised by three different departments throughout December – Engineering, ICT and Public Services.

Waqar Naweed, Engineering Lecturer said: “Our football tournament between staff and students took place on Wednesday 9th December. Our students were very happy that they won!

“We have raised a total of £165 for Pendleside, which we were all very pleased with. I wanted the tournament to represent the unity shown by all students and staff members at Nelson and Colne College, who are all from different backgrounds and faiths. It is the second year that we have held the tournament and this year we chose Pendleside as it is a good, local cause. It’s great for our students to learn about their work in our community.”

Andrew Ashworth, ICT Lecturer, added: “Our ICT students hosted their football tournament on Monday 14th December and our Public Services’ students held a penalty shoot-out on the day with Santa in the goals. On top of this students sold Pendleside Hospice Christmas cards at our Festive Market and in total raised £74. The fundraisers were loads of fun and at the same time helped a local charity. We have been doing various work and fundraisers for Pendleside in recent months and will continue to do so in the coming months.”

Sammi Bracewell, Pendleside Hospice Fundraiser said: “It is so great to have the continued support of staff and students at Nelson and Colne College.  They have raised a fantastic amount for Pendleside which we really appreciate. To keep the hospice open we need to raise £2.8 million each year and therefore rely heavily on local colleges, schools, businesses and individuals in our community hosting events like the ones at Nelson and Colne College and donating.

“As Waqar said it is great to see people from different backgrounds working together to do something amazing, whilst learning that Pendleside cares for all people in Burnley and Pendle who have been diagnosed with life limiting illnesses free of charge regardless of their religion or culture.”