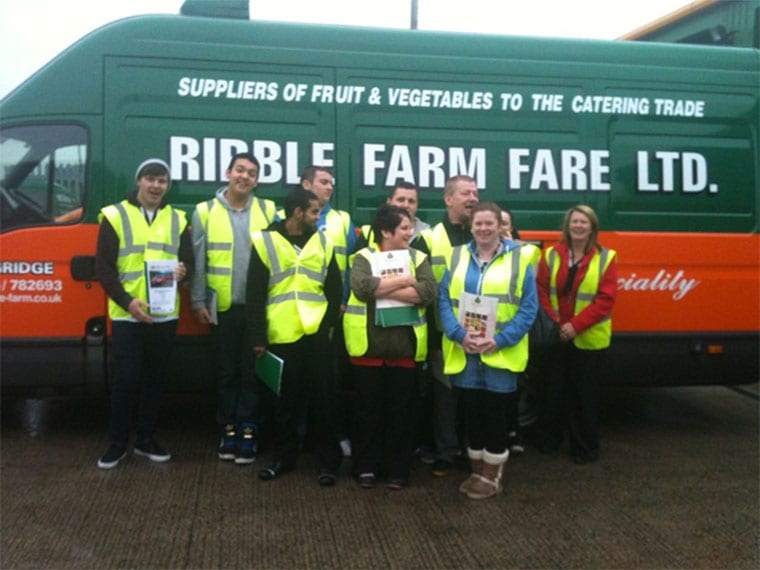 Students’ lessons down on the farm!

Students studying for Level 3 Catering qualifications at Nelson and Colne College Sixth Form have visited Ribble Farm Fare to gain an insight into the provenance of the produce they use.

Ribble Farm Fare is a thriving family business in the Lancashire town of Longridge, which has been trading for over 45 years. Along with fresh fruit and vegetables Ribble Farm Fare also supply local and continental cheeses, yoghurts, butter, eggs, milk, oil, dried goods and other fresh produce to the public and private sector.

The College’s School of Culinary Arts is committed to giving its students an all-encompassing education, which takes into account the origin of the products used in its dishes. As Ribble Farm Fare is dedicated to sourcing British grown and locally sourced produce when supplying to its customers, which goes hand-in-hand with reducing the company’s carbon footprint, it was the perfect business to take its students to in order to gain a better understanding of where food comes from.

The group were particularly keen to find out about new and emerging products for use in the kitchen such as Micro herbs and they visited the production room where all the fresh vegetables are prepared. They were also given an insight into business matters such as staffing and turnover. As an added excitement, the students were told that the produce being prepared that night were for the Manchester City Champions League match versus Real Madrid!