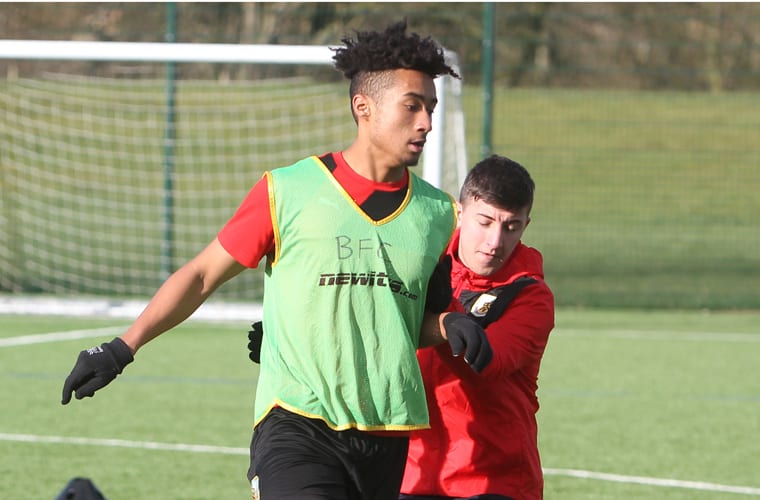 A talented young sportsman who is now part of a premier league shadow squad is celebrating reaching another goal.

Joseph Kouadio, 17, who is on the Burnley FC Shadow Squad programme at Nelson and Colne College, beat tough competition to make it through to the global finals of the Nike Academy Trials in Paris.

The aspiring footballer was put through his paces – starting as one of around 7,000 UK applicants and taking part in regional and national trials to make it through to the final seven for the prestigious global finals.

His latest success comes after he was selected for two trial games with Burnley FC’s under 18s team, where he will continue to be monitored.

Joseph said: “The trials were fun and very enjoyable – I gained exposure and experience, and got training from the best coaches and players from all over the world.

“I feel a lot more confident since being a part of the Burnley FC Shadow Squad – it has enabled me to adapt to a higher level of football and I feel confident that I can get signed by the end of next year. My coach Chris has mentored me, helped me develop and supported me with opportunities like the Nike Academy Trials – where I am now a part of their talent pool.”

Head coach Chris Andrews added: “We are thrilled with Joseph’s achievements to date and have high hopes he will achieve his aspirations of becoming a professional footballer. After Bank Holiday Monday’s game against QPR, we are delighted to say that we are now a premier league shadow squad – committed to nurturing talent, providing expert training and ensuring the best opportunities for students like Joseph.

“By being a part of our shadow squad, our students are able to gain a qualification while benefitting from professional coaching, competing in games and receiving support from a premier league club. There is opportunity for students to gain overseas scholarships, or even to be scouted by Burnley FC or other professional clubs.”

Ambitious football players looking for similar opportunities to Joseph are invited to sign up to upcoming Burnley FC Shadow Squad trials. These will take place on:

To sign up visit www.burnleyfccommunity.org/bfc_syt and for more information on the Burnley FC Shadow Squad Programme go to www.nelson.ac.uk/16-18/vocational/level-3-burnley-fc-shadow-squad-coaching-academy