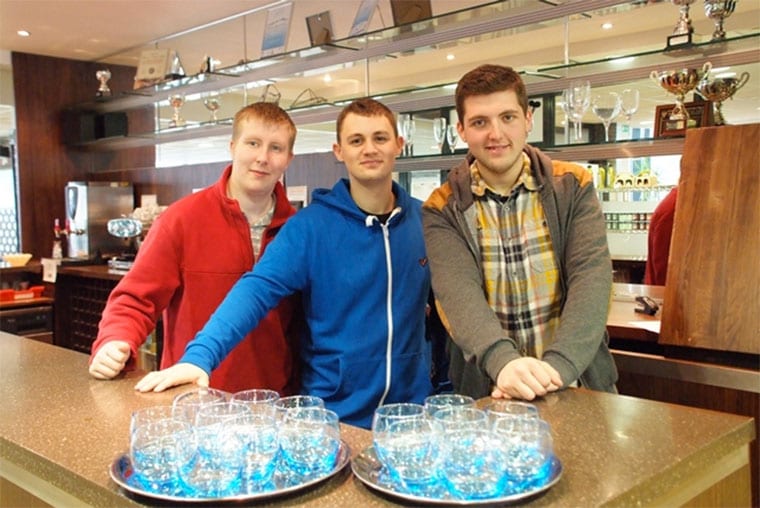 Three former Hospitality students from the College returned to the classroom last week to tell current students about their current careers.

Sam Marks, Daniel Wright and Richard Foster all completed Level 3 qualifications in Hospitality, Supervision and Leadership or Supervisory Food and Beverage. Working in the College’s stylish restaurant and bistro Farringtons, which is open to the general public during the term, these young men were able to develop their customer service and restaurant management skills, meaning that upon completion of their studies they were able to secure positions working in well-established restaurants.

Sam Marks completed work experience with Michelin Starred chef Simon Rogan whilst still at College and was offered a full time position at Rogan and Company in Cartmel in Cumbria when he gained his qualification.

Dan Wright is now working for top celebrity chef Heston Blumenthal at his Michelin starred restaurant the Hind’s Head in Berkshire. Whilst working front of house he has served the likes of Brad Pitt, Lily Allen, Professor Green and Shia LaBeouf

Richard Foster is now working at a local pub and bed and breakfast, the Fountain Inn in Barnoldswick, where he gained valuable front of house and bar skills.

Curriculum Leader for Catering and Hospitality Jason Benn said, “We are really keen to emphasise the importance of integrating industry expertise. We do this through specialist workshops with visiting guest speakers and visits to restaurants and suppliers. In the past, students have worked alongside BBC Asian Fusion Chef Aazam Ahmad, the exceptional team from the Assheton Arms and enjoyed presentations from the team at Michelin Starred Northcote. These experiences enhance the students’ culinary repertoire and make them outstanding candidates when looking for employment.”