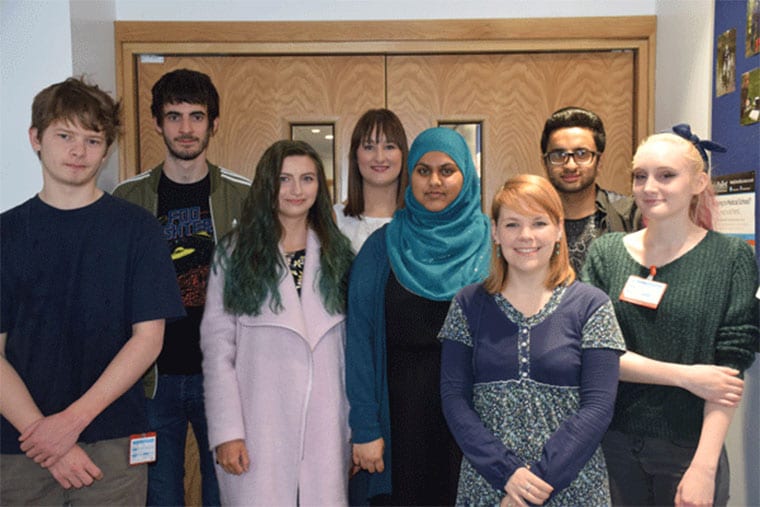 Alumni return to NCC to inspire and help Science, Maths and Computing students

A group of alumni returned to Nelson and Colne College to take part in a fun and engaging speed meeting event.

Eleven former students were invited back to the NCC Science, Maths and Computing department to talk to and inspire students about their degrees and University life, and catch up with their former tutors.

Each current student was given a set amount time with one alumnus before a bell was rung for them to move to the next person. At the end of the session, they were then given opportunities for more in-depth conversations with anybody that had sparked a particular interest.

Curriculum leader for A Level Science Brenda Rowan said: “The event was brilliant, and definitely is something we will do again.

“There was a real buzz in the room, and our former students were happy to get involved and give something back to the College.

“They were able to hear about a range of Science, Maths and Computing degrees, from the more traditional to the more unusual. One of the degrees discussed was in Orthoptics [the study or treatment of irregularities of the eyes], which students weren’t familiar with, so by the end of the day they knew the difference between Orthoptics and Optometry!”

Former Park High School student Chantelle Waddington (17), who is studying Maths, Biology and Chemistry at Nelson and Colne College and who hopes to study Medicine at University, said: “It was really exciting being able to talk about the different paths people have taken and it made me see all the different options I have.

“The fact that we were speaking to people who used to attend NCC made us relate to them – they have been in our shoes, and they could talk to us about University life. Everybody really enjoyed themselves and each person managed to find one person they could ask questions to after the event.

“I would love to come back when I have left College and take part in a similar event!”

Alumnus Lauren Tansey said: “The event was really good, and it was great to see all my former tutors.

“The students were grateful we came in, and were asking lots of question about University life and accommodation.”

Despite the fact students leave College, they forever remain a part of its community – and staff and studentsalike always love to hear how alumni are progressing.

For more information about Science, Maths and Computing at Nelson and Colne College contact 01282 440272.