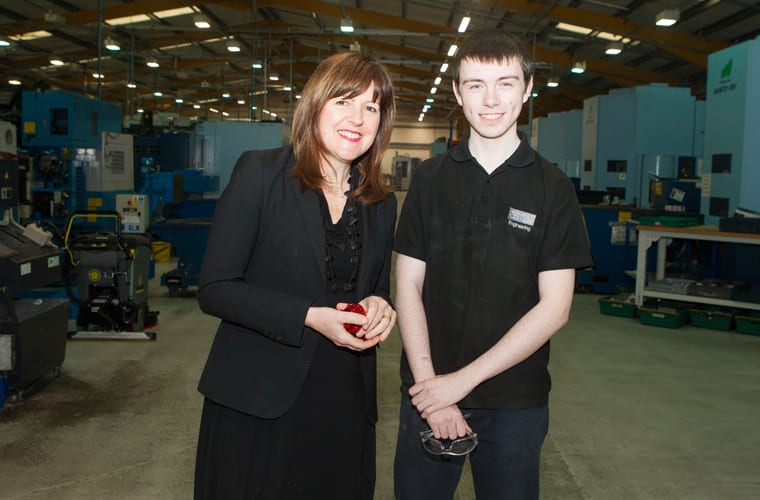 Two students becoming MPs for the day and a College Principal going “back to the floor” to see what life is like as an apprentice were just two of Nelson and Colne College’s National Apprenticeship Week highlights.

One of this year’s key themes was “rise to the top”, and to celebrate NCC’s Principal Amanda Melton paid a visit to bike part manufacturer Hope Tech, in Barnoldswick, to see apprentice Cameron Monk on his journey to his dream job.

Amanda was given a full tour of the impressive site, in Calf Hall Road, and was able to speak to Cameron and Hope Tech’s works manager Lindley Pate about the benefits of apprenticeships.

The NCC Principal said: “It was wonderful to spend time with Cameron and Lindley as part of National Apprenticeship Week and see the fabulous Hope Tech site.

“By doing an apprenticeship, Cameron is able to get a nationally recognised qualification, while earning money and gaining skills and understanding in a real work environment – benefitting both him and his employer. I am positive he will continue to thrive with Hope Tech and ‘rise to the top’ to his ideal job in the Research and Development department.”

Cameron, 18, from Burnley, said: “University wasn’t really for me and I wanted experience of the workplace – doing an apprenticeship is a lot of fun, and I am able to put the practical skills I learn at College to use in industry. If your learning style is more hands on, then I would definitely recommend doing an apprenticeship.”

Other activities taking place for National Apprenticeship Week included students giving an insight into a typical day as an NCC apprentice on social media, and two students shadowing Pendle MP Andrew Stephenson for the day to become apprentice MPs.

Syed Jawad Ali, 17, from Nelson, and Aaron Hamilton, 22, from Burnley, got to speak to Mr Stephenson about the role of MP, and accompany him on a range of visits, including to Barnoldswick’s Silentnight to talk about apprenticeships, Brierfield Library to speak to In Situ and Super Slow Way and Nelson and Colne College for the Rotary BAE Systems Technical Tournament.

Former Pendle Vale College Syed, who studies Law, History, Sociology, and Religion and Philosophy, said: “Shadowing Andrew has been an eye-opening experience, and I feel like my confidence in public speaking has increased a lot.”

Aaron, 22, who is part of the North West Young Apprentice Ambassador Network, added: “It has been good for me to see what Andrew thinks about apprenticeships and how he wants to support them.”

Mr Stephenson said: “It has been great having two students from Nelson and Colne College shadowing me to see what my job entails. NCC is an outstanding apprenticeship provider and I am delighted that so many local companies are choosing to work with the College – I hope that even more will be inspired by National Apprenticeship Week.”

Nelson and Colne College’s apprenticeship success rate is among the best in the UK  – with many Apprentices being kept on into full-time employment. Some learners now even run their own businesses, like Stuart Craig, whose Barbering apprentice has seen him go on to run Shokwaves Barber Shop, in Dockray Street, Colne.

Anybody looking to become an apprentice or employers wanting to know more about the benefits of apprenticeships can find out more by contacting 01282 440319.