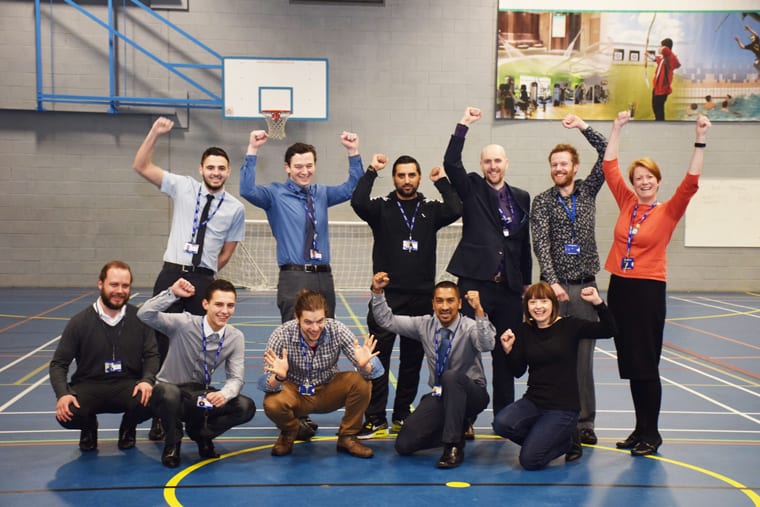 A loving mum whose baby boy was born sleeping is teaming up with her Nelson and Colne College colleagues to raise awareness and money for the charity that supported her through such a difficult time.

Rachel Cox, who is Student Services Manager at NCC, will be joined by 15 members of staff at the Great Manchester Run on Sunday 22nd May – in a bid to drive up funds for stillbirth and neonatal death charity Sands.

Rachel and her husband Adam were left devastated in January 2011, when their baby Ewan Mark Cox was stillborn after seven months of pregnancy.

Rachel, 38, who is also mum to Dylan, 4, and Jude, 15 months, said: “Losing Ewan was a complete shock to the family, and it was the support of Sands that helped us through our grieving process. Because of the charity’s work, we were able to use the serenity suite at Burnley General Hospital, and spend quality time with our baby.

“The generosity of staff at Nelson and Colne College has been overwhelming, and I am thrilled they have chosen to raise money for Sands at this year’s Great Manchester Run. We are hopeful to reach our target of £500, so the charity can continue with its research and ultimately prevent other families from suffering in the future.”

Since 2011, Rachel and Adam have hosted three quiz nights and actively promoted the incredible work of Sands – raising more than £8,000.

The charity operates throughout the UK and exists to support anyone affected by the death of a baby, to improve the bereavement care received by parents and families, and to promote research to reduce the number of babies dying.

Judith Abela, Acting Chief Executive of Sands, the stillbirth and neonatal death charity, said: “The efforts and dedication of our fundraisers never fail to amaze us here at Sands. We depend almost entirely on the generosity of our supporters to help bereaved parents and their families, work with health professionals to improve bereavement care and fund research to save babies’ lives.

“We cannot thank Rachel Cox and her colleagues at NCC enough for taking on this amazing challenge, for Sands and in memory of baby Ewan Mark Cox. We wish them all the very best on the day.”

To make a donation to the NCC team go to www.justgiving.com/Nelson-and-Colne-College3

If anyone has been affected by the death of a baby, and would like some support from Sands they can contact the helpline on 020 7436 5881 or helpline@uk-sands.org