Art student James to put on thought-provoking display in Nelson 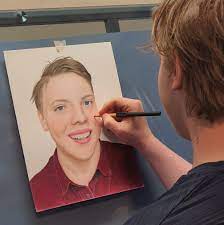 Art student James to put on thought-provoking display in Nelson

BTEC art and design student James Carter will publicly destroy four paintings in front of an outdoor audience next week as he completes his final year project.

The 19-year-old will put four A2 canvas recreated from original artwork through a tree shredder before adding the remains into an epoxy resin to create whole new piece of art.

James will then auction off the original paintings and donate the earnings to the charity Team Trees.

The project came about after James and fellow students were asked to reimagine Nelson through their art.

James explained: “I will have four original oil paintings in the size of A2 canvas, that are recreations of an old photograph of the canal in Nelson showing a time before we cultivated the land, with animals running free.

“These paintings are going to be put through a tree shredder in the middle of the town centre in front of the Shuttle.

“I want to draw in the community for this experience, as the people who come to see the artworks, will be the only people to ever see these works live in person. The destruction of these works will also be live-streamed on YouTube to bring in a larger audience.”

James, who was home schooled in Australia and then Pendle before attending Nelson and Colne College, wanted to do something impactful to promote the use of environmentally friendly materials and encourage individuals to make changes to their daily lives.

To support his project, he had also written and published a book called “Time To Make The Change” which focuses on teaching people how they can make a change to help the environment and future generations, as well as how they can save money doing so.

He said: “It teaches people that they don’t just need to rely on large companies and countries to make a change.”

If you would like to witness James’ live art destruction and reassembly, it will be taking place in front of the Shuttle in Nelson town centre between noon and 2pm on Saturday, May 14th.

If you can’t make it in person, the event will be live streamed on James’ YouTube channel James Carter Art. You can see a preview here

The event is finished.