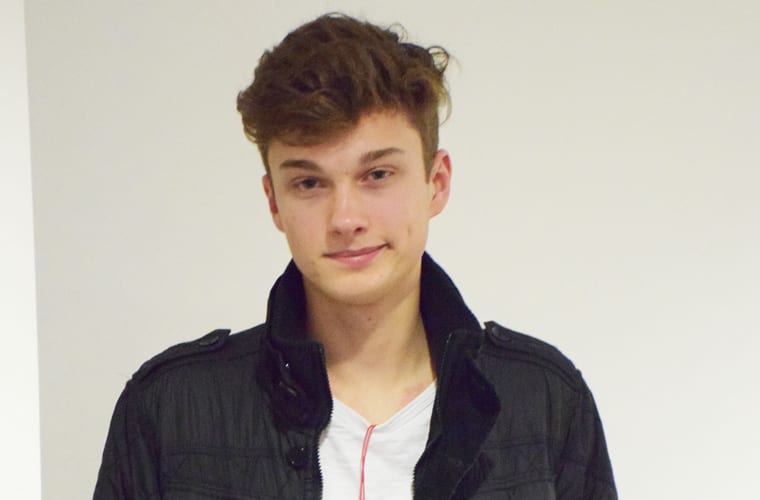 An aspiring politician from Laneshaw Bridge is already making a strong impression in the world of Politics after bagging himself an internship at an MEP’s office in Brussels.

George Marston, 17, secured the invaluable work experience at MEP Sajjad Karim’s office by entering a competition run by Nelson and Colne College – where he is currently studying A Levels in Government and Politics, Religious Studies and History.

The contest was officially opened during NCC’s Europe Day in November, where former student Sajjad spoke to students about achieving aspirations and the role of Europe. The competition was judged by NCC’s Level 3 Tutorial Leadership Team, and was open to all students across College. To enter, students had to answer the question ‘What does the European Union mean to you?’ and explain their skills and attributes, before taking part in an interview process.

George, who will complete his internship later this year, said: “I feel very honoured that I have been given this opportunity and I want to make sure I do a good job and represent Nelson and Colne College as best I can.

“I have been interested in Politics for a while now, and it is what I want to go into in the future. I want a job where I can do something to make the world better. I am excited about meeting Sajjad and learning from him throughout the internship.”

By taking part in the internship, George will gain a valuable insight into the running of the parliament and the institutions of the EU, together with practical experience on the day-to-day demands of a busy parliamentary office.

MEP Sajjad said: “It was great to visit Nelson and Colne College for the first time since I studied A Levels there some 25 years ago.

“The College has been recognised as one of the top colleges in the country with a marvellous team of staff providing support to students across a wide range of subjects and vocations.

“I am therefore delighted to offer a week’s work experience in my office in the European Parliament as the prize for the essay competition, launched on the College’s first Europe Day held during my visit in November.

“I look forward to welcoming George Marston to Brussels later this year.”

And Assistant Principal Paul Britton, who was among those on the interview panel, added: “A huge congratulations to our winner for securing this internship. Among other attributes, George has shown himself to be a confident team player, and I am positive this is just the beginning of a successful career in Politics for him.

“Here at NCC, we are dedicated to giving our students enrichment experiences that will enhance their future career, and are delighted our alumnus Sajjad has opened up this fantastic opportunity so he can help a student following in his footsteps.”