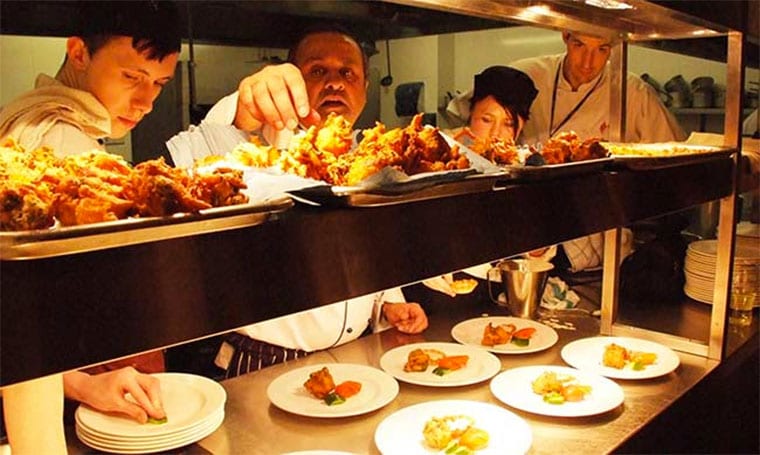 Nelson and Colne College’s School of Culinary Arts was pleased to welcome BBC Asian Fusion Chef Aazam Ahmad to the kitchens to work with its Catering students in creating a speciality Asian Fusion banquet.

The College’s School of Culinary Arts has a long-standing reputation of helping talented chefs to ‘make-it’ in the catering and hospitality industry, with former students going on to work in a range of top restaurants including Michelin starred Northcote and Raymond Blanc’s Le Manoir aux Quat’ Saisons. The College regularly invites prominent local chefs to lead a special service and was pleased when Aazam Ahmad agreed to attend the kitchens to lead the students in preparing a special Asian Fusion banquet.

Aazam Ahmad is the BBC’s fusion chef and Ambassador for Williams BMW. Famed for his unique ability to combine an array of tantalising flavours in his cuisine, Aazam who has enjoyed numerous TV appearances both for the BBC and Granada and is a regular at prestigious Food Shows such as the BBC Good Food Show and the Mela Festival in London. He acts as a food advisor for prestigious corporate events.

Aazam also claims a special connection to Nelson and Colne College, as Catering tutor Anthony Fallon was also Aazam’s tutor when he was training to be a chef in Cheshire.

Diners enjoyed a fantastic banquet which consisted of Salmon and Broccoli Pekora served with a Yoghurt Dressing; Chicken and Prawn Wonton served in a Schezwan Pepper Chicken Noodle Soup; Pan-seared Swordfish with Mango and Mango and Pawpaw; Lamb Cutlet wrapped in a savoury Mash and shallow fried, served with a warm Plum and Cardamon Chutney; Traditional Chicken Biryani with Tamarind served with a garnish of Cashews and Flaken Almonds, accompanied by Natural Yoghurt Raita and Naan Bread; followed by a choice of two puddings; Fresh Lemon and Pineapple Bakewell or Pistachio and Almond Mille-Feuille.

The College is keen to offer a broad culinary experience to its students and opportunities to work with top chefs such as Aazam, which really enhance their studies; making them valuable employees for local restaurants and helping them on their way to becoming the next generation of world class chefs!

Nelson and Colne College Catering tutor Anthony Fallon said “Aazam has such a diverse background; it’s great for our students to be able to learn about fusing English cooking with far eastern styles.”