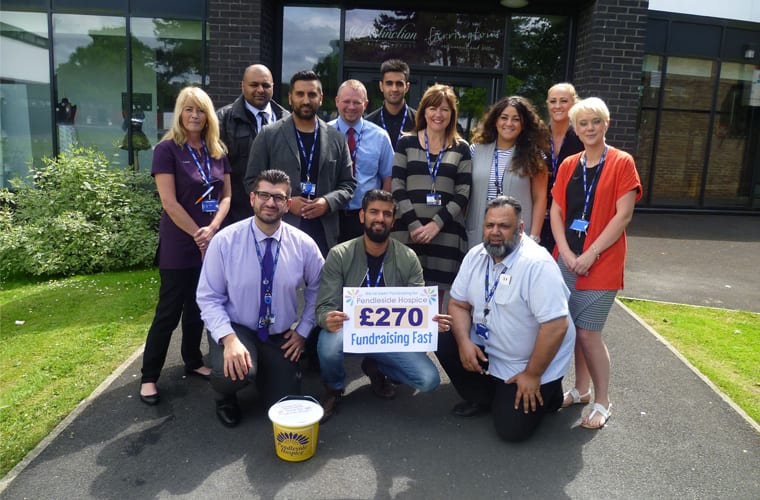 Members of staff at Nelson and Colne College have taken part in a 24 hour fast and raised a fantastic £270 for Pendleside Hospice.

The idea was thought up by Shakoor Ghafoor, from NCC, who is currently fasting for Ramadan. Shakoor decided to get his colleagues involved and raise some much needed funds for the local hospice at the same time.

Shakoor Ghafoor said: “A lot of staff members are really inspired by the Muslim community fasting for such long hours. It teaches us self-perseverance and allows us to experience how others face starvation around the world.  One of the key features of the month of Ramadan is not just the fasting – it is also about understanding and giving.

“Therefore I thought it would be a great idea to get all staff involved in a one day sponsored fast, to raise money for Pendleside Hospice.  We had 14 staff who undertook the sponsored fast. It was a real challenge for people but a real success, and one they found rewarding.”

Hospice fundraiser Vikki Bassek said: “We greatly appreciate the effort that everybody went to in order to raise this money for Pendleside.  The hospice needs £3.8 million this year to continue providing its services.  A grant from the NHS provides approximately 26% of this but the balance £2.8 million is raised locally.  Without the efforts of people like Shakoor and other NCC staff members the hospice wouldn’t be able to carry on.”