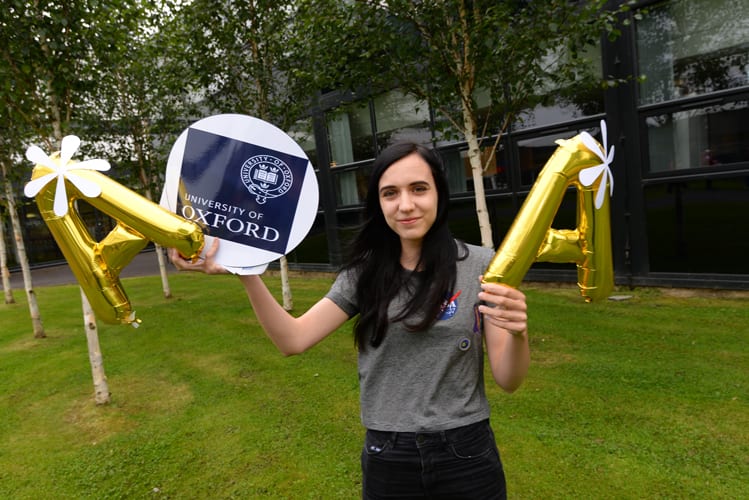 Star student Lotte Gleeson says that two years ago she could never have imagined landing a place at University – let alone one of the most prestigious in the country!

And now the 18-year-old, a former Colne Park High School student, is walking away from Nelson and Colne College armed with three A* grades and an A in Maths, Further Maths, Chemistry and Physics, and her dream offer to study Physics at the University of Oxford.

Lotte knows only too well the anxieties that young people can feel when thinking about their future, having suffered with mental health herself for several years, while at secondary school. Now, she hopes her story will inspire others to believe in themselves and to have confidence in their aspirations.

Lotte, who hopes to pursue a career in Physics research and development, said: “At school, I didn’t think I had the ability to be able to go to University at all, let alone Oxbridge. I am in the first generation of my family to attend University, and never really met anyone who had been to University except for teachers, and I certainly never knew anyone who had been to Oxbridge. I want to show young people in my community that hard work and dedication does pay off.

“The main reason I chose Nelson and Colne College was because I looked at the percentage of pupils getting high grades. When I saw the percentage was much higher here than at other colleges, that is why I decided to come to NCC. I have really enjoyed my last few years here – I have learnt a lot but I have also developed as a person.”

To get into the University of Oxford, Lotte taught herself most of the A2 Physics syllabus in her first College year. As well as thriving academically, Lotte has also made the most of additional enrichment opportunities and secured her own volunteering work, to stand her in good stead for her future. These include:

Nelson and Colne College staff and students are celebrating a 99.9% pass rate and more than half of students achieving A* to B grades.

For more information about courses at Nelson and Colne College contact 01282 440272.