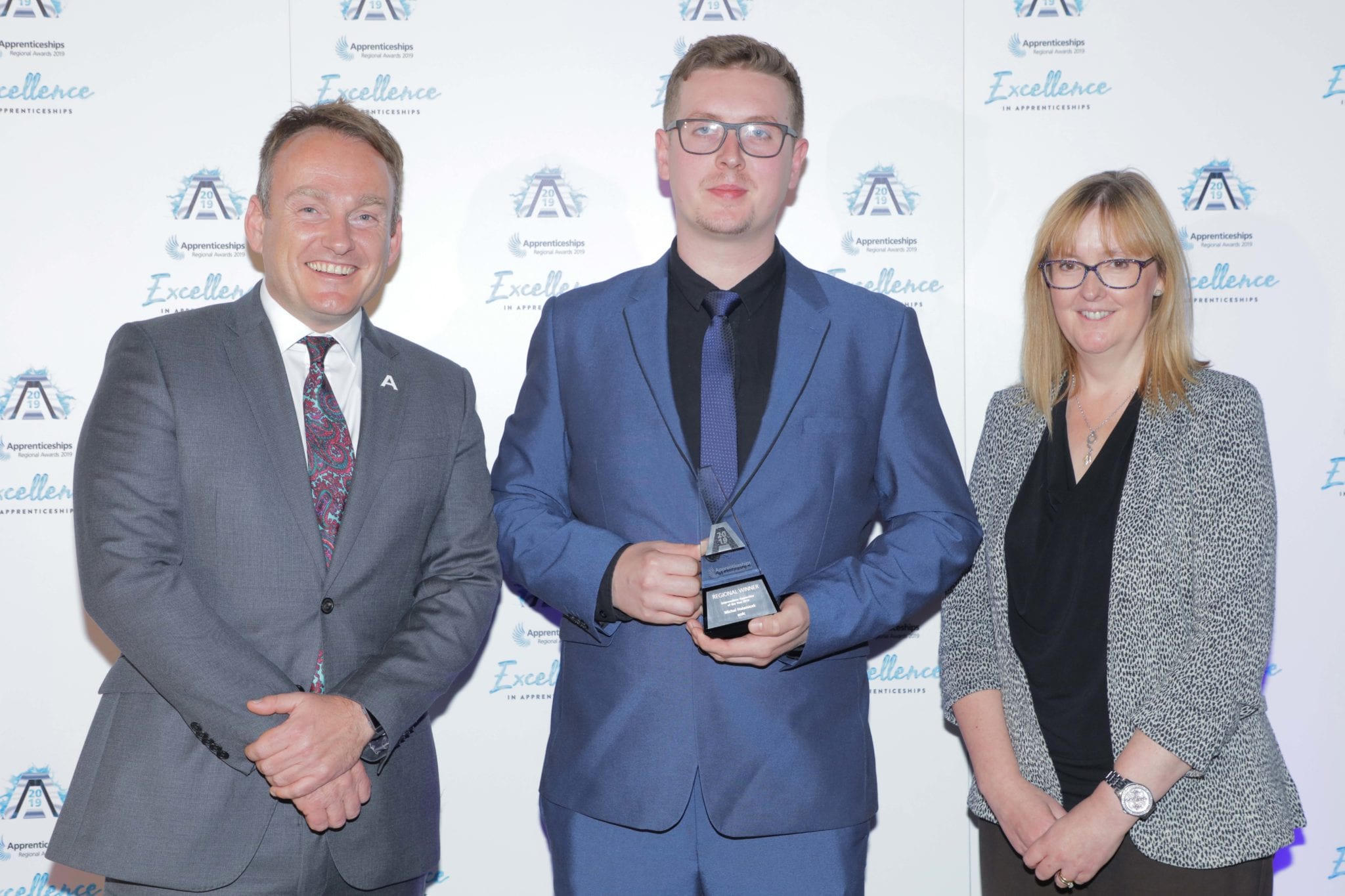 A Nelson and Colne College Engineering Apprentice who has made a significant difference to the performance of his employer acdc has won a coveted Apprenticeship accolade.

Michal Halamicek, 30, who is Quality Controller at the Barrowford lighting specialists, underlined his status as a shining example to other Apprentices by walking away with the title of North West Intermediate Apprentice of the Year at the National Apprenticeship Awards Regional Final in Liverpool.

Michal will now progress to the national final in London on 27 November, where he will be up against the Intermediate Apprentice winners from the country’s eight other regions.

Since gaining the position of Quality Controller in December 2018, Michal has introduced a new purpose built inspection room which has significantly reduced the number of defective products leaving the factory to an all-time low in 2019. On the company’s most popular product line, for example, the average improvement is between 50% and 66%.

New soldering irons which melt solder at a lower temperature and provide a better connection have also been introduced by Michal and the company has had zero returned products from customers due to soldering defects in 2019.

Michal says that through his Apprenticeship, he has improved his spoken and written English, developed his confidence and ambition, and boosted his computer skills and analytical and problem solving skills. He also believes his engineering drawing and tooling skills have been enhanced and he has a better understanding of customer service and relationship management.

Michal said: “It’s been a great learning journey for me, and a really good experience. I’m delighted to be recognised and it’s a massive achievement.

“I didn’t expect to be in a College when I came to England from Czechia seven years ago with no regonised qualifications, so it is fantastic to have completed an Intermediate Apprenticeship and to now be working towards an Advanced Apprenticeship. It’s putting me on the path to become a fully qualified Electrical Engineer and an expert in the field of compliance which is my career aim.

“Without the support of acdc and my colleagues, as well as the Apprenticeship Team at Nelson and Colne College, none of this would have been achievable. I’m very happy, grateful and proud to win such a prestigious award.”

As well as becoming Quality Controller, Michal’s technical knowledge of the company’s products has also seen him take on an After Sales role at acdc. He says his biggest achievement is one that came through this role – by conquering his fear of heights when working on the roof of Tottenham Hotspur’s new £1billion football stadium, at which acdc supplied the lighting for the roof and exterior.

Harriett Wrest, Quality Manager at acdc, said: “I’m extremely proud of Michal and this accolade is very much deserved. His work ethic and innovative approach to making improvements to business processes, and to the performance of the company, is exemplary and these qualities underline his determination to succeed.

“He is a valued member of the Quality Team at acdc and Michal’s enthusiasm and passion is also motivating colleagues, which is an additional benefit to the business. We’re thrilled that he has won this award.”

Barbara Livesey, Director for Apprenticeships and Training at Nelson and Colne College Group, said: “Michal’s progress and his willingness to continually to improve himself and the business really is inspiring. He is a shining example to other Apprentices.

“His ‘right first time’ attitude transfers from the shop floor at acdc into the work he has produced throughout his Intermediate Apprenticeship. Michal’s Trainer Assessor has consistently been very impressed by the standard of the course work he has produced, and I would like to congratulate Michal on his stellar achievements on behalf of the Apprenticeship Team at College.”

Nelson and Colne College is the number on college in the country for 16-18 timely Apprenticeship achievement, and is number one in Lancashire for employer satisfaction in the FE Choices Employer Survey.