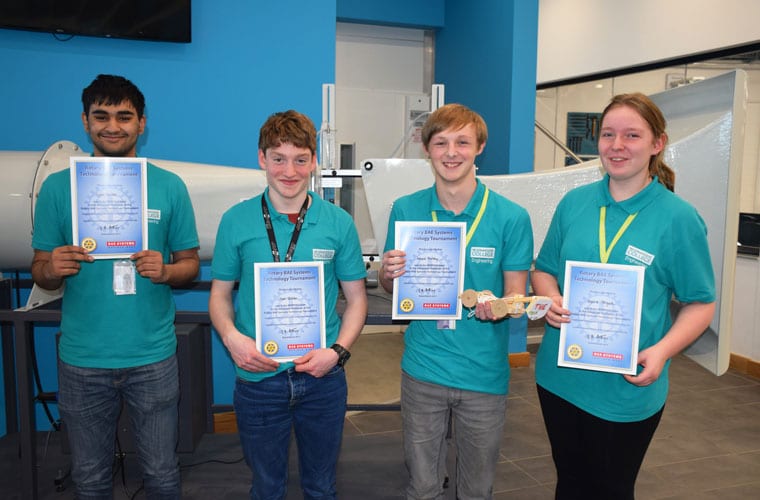 Nelson and Colne College hosted an annual Rotary-organised technology tournament on Friday as four schools competed to have their creations crowned as the best.

NCC students joined peers from Colne Primet Academy, Pendle Vale College and Haslingden High School and Sixth Form in the fifth edition of the tournament which was sponsored by BAE Systems.

Students in 17 teams were tasked with creating a pipeline mole, a device to run down a pipeline and clear debris, at three different levels of difficulty.

After a tense period of

judging where the moles were scrutinised and tested, the winners in the three categories were announced as:

Event organiser and Rotarian, Geoff Atkins, said: “It was another excellent tournament and there was a real buzz in the hall in the afternoon when the students were busy testing the moles.

“Every year the project is different and I think this was the most challenging one that we have done to date.

“Well done to all of the schools and students who took part in the event and thank you to Nelson and Colne College for the help and support with hosting the tournament. It is very much appreciated by Rotary.”

Brent Marshall, Section Manager for Engineering at Nelson and Colne College, said: “It was an honour for the College to host the technology tournament again and it has become a popular event in the calendar.

“Some of the ideas developed by students during the day were brilliant and for NCC to win the Advanced level category really was the icing on the cake.”

NCC provides students with a range of enrichment opportunities throughout the academic year.

In January 2016, the College launched its state-of-the-art £2m Engineering facilities. The Lancashire Enterprise Partnership (LEP) invested £1.4m into the impressive skills facility, which includes a unique subsonic wind tunnel and fully equipped workshops with the latest technology, software and machinery.

The College is also number one in Lancashire for student satisfaction, according to a recent FE Choices Learner Satisfaction Survey, and the latest government data places NCC as top in the county for A Levels, based on progress scores, measured against colleges who entered more than 100 students into exams.