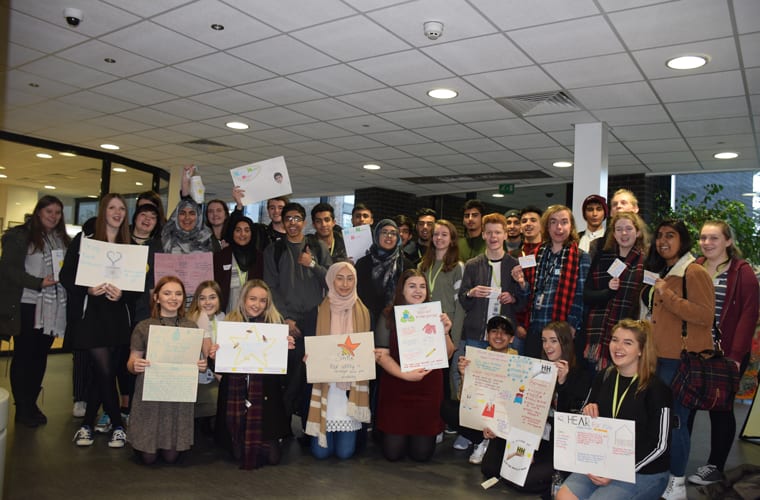 Nearly 300 A Level students had the chance to show their entrepreneurial flair during NCC’s Social Enterprise Challenge Day 2016.

Sixty four teams first had to identify a social problem in the local area before coming up with a solution to the situation.

They then presented their idea to their peers and a winning concept was voted for.

Winning ideas included recycling school uniforms for the benefit of those less fortunate, to creating and distributing electric mattresses for the elderly, to a respite care fun fair for young carers who look after a parent or sibling.

The winning teams will now be put forward for an online vote and the overall winning team will receive £200 pounds to start up their project with the help of the Student Hub.

Charlotte Nicholls, 16, who was part of the “Burnley Balance” team, said: “It’s been a great day, we have really enjoyed it.

“The group wanted to help young carers by raising awareness of the children who have to care for a family member and have to balance their social life and education.

“The idea is a fun fair which would allow families the chance to have some fun while giving the child a break.”

Aminah Daar, 17, who was part of the “Smile” team, said: “Our idea is to set up a sports and leisure centre specifically set up to cater for people with disabilities.

“We want to empower people and give them belief to give it a go and that they can do sports such as athletics and wheelchair basketball.

“We want to draw on the inspiration of the Paralympic athletes who performed in Rio.”

Lauren Clark, 16, from the “School Aid” team, said: “We want to collect clothes, recycle them and distribute them for people who cannot afford school uniforms.

“There is not a lot of support for families in this area and we wanted to support them.”

“The group did some research and discovered that one in four pensioners feared not being warm enough during the winter.”

Nelson and Colne College is committed to developing students not only in the classroom, but outside as well – preparing them for their future, be it at University, as an apprentice, or in a job.

Joanna Turner, curriculum leader for A Levels, said: “We have had 285 students taking part in the challenge, split into 64 teams, and it was a really good day.

“Each team identified an issue, whether that be for pensioners, young offenders, single parents, or another target audience, and then thought about putting a solution together for those issues.

“The students came up with some brilliant suggestions, which not only show how talented they are, but also that they have a good grounding and awareness of some of the social difficulties that exist in the local area.”

The next Year 11 Open Event at Nelson and Colne College takes place on Wednesday 1st February, between 5.30pm and 7.30pm. For more information about studying at NCC contact 01282 440272 or visit www.nelson.ac.uk