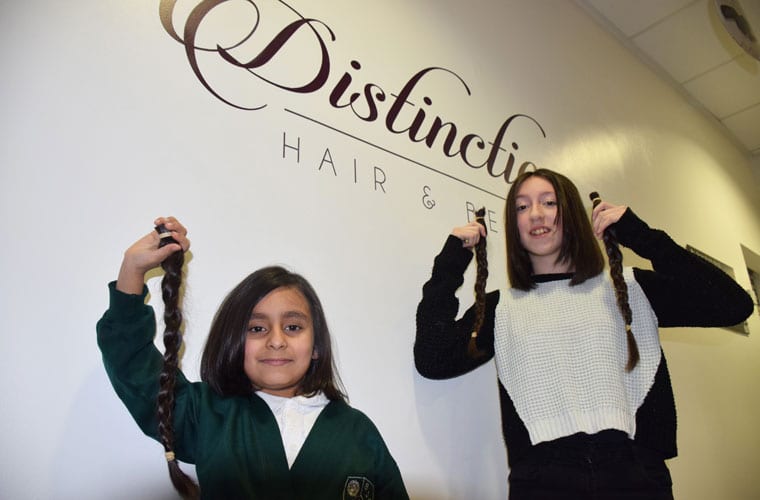 Two kind-hearted children have donated 12 inches of hair to a charity in an act of distinction.

Romiea Robinson, 12, and Abeerah Awan, 8, chose Nelson and Colne College’s Distinction Hair and Beauty Salon to chop their long locks – so they were able to send them to The Little Princess Trust, a charity that helps create wigs for children who have lost their hair during cancer treatment.

Abeerah, who goes to St John Southworth Primary School in Nelson, had her cut by her mum Mamoona, also a Level 3 Hairdressing student at NCC. She chose to do it after her great-grandmother’s battle with cancer.

Mamoona said: “Abeerah has been really excited and has been talking about it for days and days.

“She started growing her hair when she was five. Her great-grandmother died of breast cancer and we thought this would be a nice thing to do.”

Romiea said: “I decided that I was going to do this in October and have been fund-raising since. It is to benefit young children who lose their hair when they are ill with cancer.”

Joanne said: “We’re very proud of Romiea. She is just a lovely girl and has made this decision herself.

“She has raised so much money through sponsorship and it’s for a fantastic cause.”

As part of the fund-raising venture, Ashleigh Martin, another of NCC’s Level 3 Hairdressing students, sold out of home baked cakes – driving up an extra £113.80 for the charity. Both girls also left the College salon with a goody bag.

NCC’s Hairdressing tutor Annette Tattersall said: “It has been an absolute delight to be a part of the donation process.

“The Little Princess Trust is a brilliant charity, where children dealing with such a cruel disease can be beneficiaries of the generous acts of children like Romeia and Abeerah. They have been absolute stars!

“With the addition of the bake sale collection to the funds raised by Romiea, the charity is also going to receive an amazing amount of money. Well done to all involved.”

For more information about Distinction Hair and Beauty – including the range of courses available and treatments available to the public – visit www.nelson.ac.uk/distinction